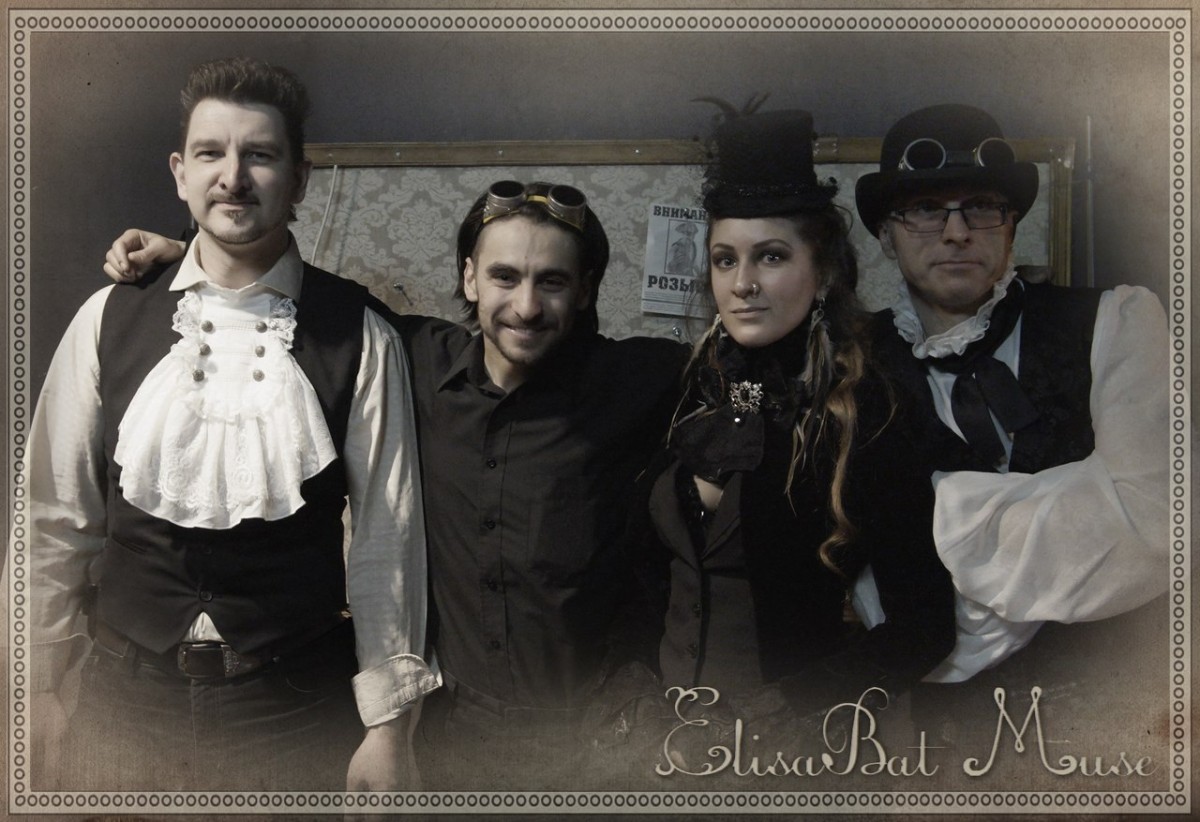 The idea of a solo project came long ago, at a time when ElisaBat was 14 years old and she was taking dancing classes, but the path to solo project was quite long and ELISABAT MUSE was founded as a band only in 2010.

The first music band in ElisaBat’s life has appeared in September of 2001. It was a little-known musical band called Gorod (Город), played in the speed-metal style. At that time, ElisaBat studied at the Moscow Music Prokofiev’s School №1 in the academic vocal class. In the summer of 2001, she met with the chief editor of the music magazine «Rockcor» and later began to write reviews on the upcoming CDs.

At the beginning of 2002, ElisaBat has been invited to sing in the infamous band Satarial, with which she was sharing stage in concerts and recorded a demo for the album «Tanz Mit … Tod».
Then she left to the Arian Vaejah band, where she participated in the recording of the «ARYAVARTA» album.

In 2003 ElisaBat has been invited to sing with a successful at that time Nemeton band, producing by Roman Drozd. During one of the rehearsals, the band visited Fedor Nikitin, who was engaged in the creation of the project Experiment at that time, and he suggested to ElisaBat to take a part in the recording of two songs. One of them was dedicated to the memory of Viktor Tsoi and got into the «Nashe Radio» rotation.

In September of 2004, ElisaBat comes to sing in Moscow Cathedral Catholic Cathedral. At the end of this year, ElisaBat leaves Nemeton to sing in the «Otragenie» band. She worked with them 4 months and then left the band and was actively engaged with her studies, participating in classic music concerts, performing a variety of classical pieces.

In the spring of 2005, ElisaBat was invited to record an album «Black Messiah» with Ordalion band. In May ElisaBat successfully singing diploma at the music school and as successfully enters to the MSI to secede Solo singing. In August, ElisaBat was offered a job — teaching in the rock college. After working for six months in the college, she started to teach students as a private teacher.

In September of 2006, ElisaBat received an offer to sing in the Yesenin commercial pop project. Concurrently, she became a sound-producer of the project. The main producer of the project Andrey Ageev suggested ElisaBat to record a cover of the popular song of Kansas «Dust in the Wind» which eventually was in rotation on «Radio One» in Libya. In October 2006, due to the large amount of work in the project activities and teaching students in the institute, ElisaBat leaves the choir of the Catholic cathedral. After working in the Yesenin project for almost a year, ElisaBat decides to leave it in favor of the study.

All 2007 passes for ElisaBat with education, lessons with students and academic concerts. In November, she met with Marie Slip from the Otto Dix band, who asked her to record something together.

In spring of 2008, the Morbid Violence band invited ElisaBat to record an album and do concert performances. In July was out a demo track «Раб Больших Городов» (Slave of big cities), which became the ElisaBat’s first collaboration with Marie Slip. At Autumn ElisaBat records vocals for Otto Dix. In 2009 was out the Morbid Violence album «Winds of Madness», and then the Otto Dix album «Зона теней» (Zone of shadows) after which ElisaBat has been invited to star in the video for the «Мечта о Весне» (Dream of Spring) song, where was used the samples of her voice.

At the beginning of 2010, ElisaBat met Clockmaker’s band keyboardist, which became the beginning of her solo project. The working title was Absinthe. Soon all projects had to be suspended — the reason for that was a university degree. ElisaBat successfully graduated from the Institute and received three specialties (Opera soloist, choir soloist and academic vocal teacher), and then she continued solo project with Clockmaker. ElisaBat invested a special meaning in songs for the project, so that the words and music were the one. Every song written by her is a unique tale, like a painting or a mini-film, combines magic and harsh reality. All because ElisaBat is desperate romantic, dreamer and realist at the same time. Soon were fully prepared two tracks — «Absinthe» and «Солнце в цепях» (The Sun in chains). They got into the Dizzaster Internet radio rotation and aroused big interest among the audience.
Also in 2010 came out the OTTO DIX album «Чудные дни» (Wonderful Days), where were used ElisaBat vocal samples.

In the summer of the same year, she met with a Geval band, from whom received an offer about cooperation, and at the end of the year came out a single «Третий Рим» (Third Rome) with ElisaBat participation. In August, ElisaBat went on very successful tour to Italy with two concert programs (classic and electronic). In November, Marie Slip invited ElisaBat again to record vocal samples for the «Чудные дни» (Wonderful Days) album. In winter, ElisaBat met Martin Bowes from the English band -Attrition, who also invited her to take a part in the recording of his new album.

The whole 2011 year was about work on solo project and for Attrition, Geval and Morbid Violence (with whom she recorded the vocal parts for their second album). Also, ElisaBat has been invited to sing for Deform band’s new album. At the end of the year, Шмели (Shmeli) band invited her to star in the New Year’s issue of their horror stories and record the soundtrack to it. In February, ElisaBat visited the Czech Republic, where she met with the famous local artist-sculptor Reon Argondian. After visiting exhibition in his fabulous grotto, she realized that the Reon’s magical world is very similar with that she tells in her songs. She gave Reon to listen her tracks and asked him to make the cover of the album using one of his paintings and she got his agreement on that.

When solo album was almost finished, Clockmaker (who was responsible for a part of musical programming), was forced to leave to homeland for family reasons. And later he let ElisaBat know that he won’t come back. Then was decided to rename the project from Absinthe to ELISABAT MUSE. By the end of the year, for the album named «Absinthe is …» was made two special remixes by Roman Rain and Attrition. Also was recorded the song «Завяжи мне глаза» (Bindfold me) with Marie Slip.

2012 year was very productive for ElisaBat. She signed a contract with the Gravitator Records label in March for release «Absinthe is…» album. The album came out in April. Tracks from the album immediately hit the compilation of the famous British disc jockey DJ DE’ATH. Magazines such as Rockcor, Rock Oracle, Dark City, Bunker etc, announced the album.

Dizzaster label released four CD featuring Elisabat in 2012. Geval album «Longin» came out in May, a month later was released Otto Dix band fiddler Peter Voronov’s album «Alchemy of Sound», in October — Otto Dix «Mortem» album, where ElisaBat sang a part in composition with the same name «Mortem», and in November — Deform EP «Deformokratiya.»
Also in May of this year, Alexander Demidov (ex-Morbid Violence and Funeral Moon) invited ElisaBat to take a part in the recording for VintergatA. A month earlier American rap artist DJ DX asked her to record a song together with the Russian rap artist Elisey Maslov. In September of 2012 came out Elisey Maslov’s «Переосмыслить» (Pereosmyslit) album, which included a song «I’ve been down».

In October of 2013, Roman Rain asked ElisaBat to be a back singer in his band. Next two years ElisaBat was touring and sharing stage with different bands like: Roman Rain, Geval, Deform, Peter Voronov, Orgija Pravednikov, etc., and with foreign bands: Abney Park, Megaherz, Hanzel und Gretyl, Parzival, Eisbrecher and etc.

In June of 2013, ElisaBat performed at the grand secular ball masquerade «Summer Night’s Dream» in the Nicholas Palace in St. Petersburg, organized by TwiGHliGHt’s Lodge Production. It was her second performance at this event.

After opening performance for the Abney Park in April 19, ElisaBat has been invited by Fyodor Barinov (Zero) to participate in first Moscow steampunk festival, Victorian and techno—art Paro Park in May 4 where band performed very well.

In 2015 started to work band’s website www.elisabat-muse.ru (April 4) and was released new Internet single «The Lost World.»
Currently ElisaBat very busy with recording her second album and with preparation for new performances. 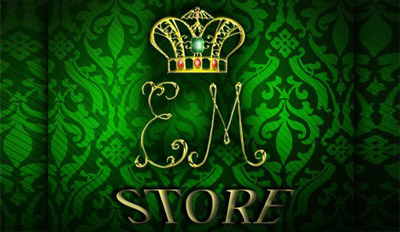